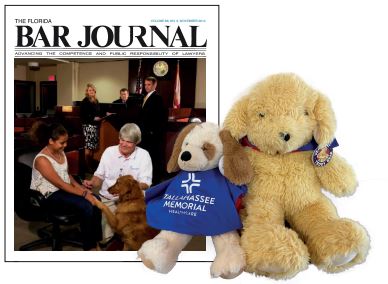 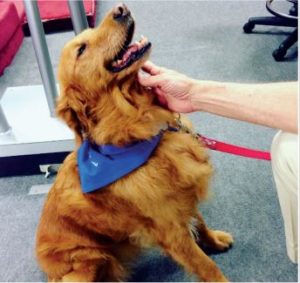 For almost eleven years, I was fortunate enough to partner with Rikki, an extraordinary courthouse therapy dog. Every year the Animal Law Section (ALS) presents the Rikki Mitchell Memorial Award to a dog that provides exemplary service to the people of Florida. Past honorees have included Rikki; Sharazz, a cadaver detecting dog; and Titan, a police dog.

Rikki passed away in 2017, and the ALS was kind enough to commemorate her by commissioning small stuffed dog toys in her likeness. Tallahassee Memorial Healthcare gives them to pediatric patients, and the victim advocates in the 2nd Judicial Circuit likewise make them available to child victims of sexual violence. It’s great to see the kids clutching the doll with one hand as they pet my new therapy dog, Sharon, with the other, and it always makes me smile. But recently I saw one of the Rikki dolls used during a capital child sexual battery case in a manner that took my breath away.

Sharon is a three-year-old female golden retriever; she’s been my new courthouse therapy partner for the last two years. She is terrific at calming anxious child victims and witnesses, helping them feel safe and comfortable enough to find the voice to testify. One of our clients was “Anna,” a child who was first sexually assaulted (and threatened with death if she talked) when she was five. She was eight when we were first called in to meet her, and we worked with her for nearly a year before we went to trial. 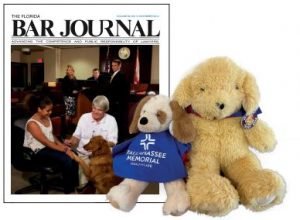 Anna was bright, but she was hyperactive and had attention-deficit disorder and other behavioral issues that made it difficult for her to calm down or focus. Her mother, a victim advocate (VA), the prosecutor, Sharon, and I met with the child many times over months, trying to help calm her fears and anxieties enough for her to tell her story. No matter what we tried, she could not talk about the awful things that had happened. She would talk about anything and everything, but when the subject turned to “him,” her hands would go over her ears, and she shut down. As the trial approached, we worked with her for hours the afternoon and evening before the trial, trying to get her comfortable enough to be able to testify.

Anna was nervous and scared, and the only thing that made her smile (other than the knowledge that Sharon and I would be in the courtroom with her during her testimony) was when she picked a Rikki doll from all the toys on the kids’ shelf in the VA’s office, because she said it reminded her of Sharon and helped her “feel good.” She held it close throughout the afternoon and evening as the VA and prosecutor gently asked questions to see if she could provide any meaningful testimony. The VA told her she could have the doll and to be sure to bring it with her the next day. Anna said she would.

After they left, the prosecutor, the VA, and I looked at each other with grim faces. Despite all of our work and effort and assurances, we were afraid Anna might not be able to find the strength to give her difficult testimony. I hated thinking this might be the first time  my dog was not enough to help a child victim find her voice. Of course, I hardly slept that night, hoping and praying, and trying tothink of what we could do differently the next day to help. I should have known Rikki wouldn’t let us down.

The morning of the trial was excruciating for Anna, as it is for every child victim or witness who has to testify. A couple of minimeltdowns to start the day did not help nor make me optimistic. Anna’s mom testified first. As she came out of the courtroom, she and her daughter began weeping in each other’s arms as soon as they saw each other. Sharon wedged herself between them, trying to comfort someone, somehow.

Soon Anna and her mother separated and began petting Sharon, calming them both. Then it was time for Anna to enter the courtroom, and off we went. I had completely forgotten about the Rikki doll and didn’t notice that Anna had taken it up to the witness stand. Sharon and I sat in the gallery, and the jury came back into the courtroom. The prosecutor asked Anna some of the easy and perfunctory questions about age, school, favorite activities, etc. But then came the hard questions. Anna suddenly got very quiet and looked down for the longest time. When pressed to tell the court if “he” did anything to her that she did not want him to do, she barely looked up, holding the Rikki doll to her face as she faced the court. She whispered between the doll’s paws, “Yes”.

For another fifteen or twenty minutes, as the questions got tougher and more graphic, she clutched that doll to her face, rubbing it all over her face as she used it both to comfort her and shield her as she barely whispered her answers—always speaking between the paws. She had to be prompted to speak up several times, which—amazingly—she did. She answered every question fromthe prosecutor and defense. Then the jury was dismissed, and we helped lead Anna out of the courtroom.

Anna had blown us all away—she was so much stronger and more resilient than we thought she could be. When we came out of the courtroom, she and her mother burst into tears in each other’s arms. She was still clutching that doll. Anna thanked Sharon for being there and the VA for giving her that great doll. It was the one thing that seemed to do the trick when nothing else—not even Sharon herself—could.

Earlier that morning I had not expected to leave the court with a positive attitude or outcome. I should have known better. “He” received four life sentences with no possibility of parole.

I am a huge believer in the power of therapy animals in general and courthouse therapy dogs in particular. I have seen them work wonders and enable children to do things they had not otherwise been able to do. But we never know what combination of things it will take to tip the scales for someone—and how grateful I was to see a Rikki doll used in this way.

How wonderful that so many of these Rikki dolls are out there helping kids who are hurting— physically, spiritually, and emotionally. Thanks to everyone associated with the Animal Law Section for your part in making these terrific dolls available to comfort kids who really need them. We will never know all of the times a Rikki doll will make a difference in someone’s life, but it sure seemed to make all the difference that day!

Chuck Mitchell is a former Chair of the Tallahassee Memorial Healthcare Board of Directors, and helped TMH create its well-recognized Animal Therapy Program. He helped create the Florida Courthouse Therapy Dogs program and led the effort to create the first law in the nation that allows therapy dogs to accompany victims of assault into court to help them testify. His pioneering work with his exceptional therapy dog is documented in “Encounters With Rikki,” by Julie Strauss Bettinger.