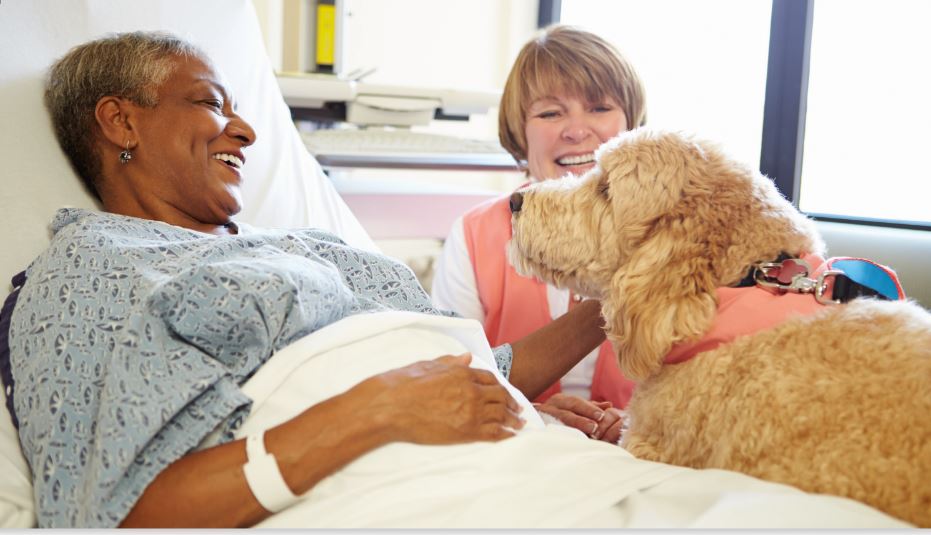 Animal Law Section members have supported the Tallahassee Memorial Hospital (TMH) Animal Therapy Department for over five years, comforting children through the Rikki SuperPup program. They have provided over 2000 plush toys to children experiencing trauma in the hospital and in dependency and abuse cases. This is just one of the ways the Animal Therapy Department is working in the community, thanks to the support of generous donors like the Animal Law Section. Below is the latest on Rikki SuperPup and other ways Animal Therapy volunteers have served, even during the pandemic.

Rikki SuperPup Goes to the Next Level

Due to hospital guidelines, the first Rikki doll funded by the Animal Law Section was cute and cuddly but nowhere near as fuzzy as the real Rikki, a golden retriever and TMH Animal Therapy pioneer who passed away in 2017. We have since had the opportunity to provide a larger, cuddlier version of Rikki from the Vermont Teddy Bear Company. “It’s so nice to see a Rikki SuperPup that [children] can really cling to and bury their face in something resembling Rikki’s beautiful golden fur,” said Chuck Mitchell, Rikki’s owner and a TMH Animal Therapy volunteer. When given to children in the hospital, the “new and improved” Rikki SuperPup is used to teach them about the care they will receive. If a child needs a shot, for example, Rikki can get a shot first. Casting material can even be placed on Rikki to match a child’s cast. TMH Animal Therapy Director Stephanie Perkins reflects that during the pandemic, “The cuddly new Rikki [was] even more needed to encourage these kids. She comes with a letter reassuring them: ‘I know you might be feeling a little icky right now, and you might be scared. Whenever you feel bad, just give me a tight squeeze. I’m soft and cuddly, and I love hugs. . . . Someone who knew that you would need a special friend in the hospital gave a gift through the TMH Foundation so that I could make my journey to Tallahassee and arrive safely in your arms.’ We are so grateful that the Animal Law Section helps children feel better through Rikki SuperPups!”

After COVID-19 hit, hospital visitor access— and in-person Animal Therapy visits—were severely restricted. The same phenomenon occurred in courthouses, nursing homes, schools, and other areas where TMH teams visit. Seeking effective new ways to help, Animal Therapy volunteers began training for virtual visits. Volunteers taught their animal partners to sit in front of a screen, helping them to interact with a client not physically in the room. “When COVID-19 first began, we weren’t sure whether virtual Animal Therapy would work,” TMH’s Perkins said, “but virtual visits are powerful.” Perkins shared a moving story from one of the first virtual Animal Therapy appointments:

“Julie”* has an extreme, and sometimes debilitating, anxiety disorder. She also has a condition that creates severe joint pain. Unless Julie receives injections in her hips and knees, she is in great discomfort. The problem is that going to the doctor creates so much anxiety for Julie that she often must cancel appointments. Starla, my Cavalier King Charles Spaniel, and I “went” with Julie to her last doctor’s appointment virtually. As Julie prepared to receive injections in her knee, she put a blanket over her head and held her phone screen close to her face so that she could focus only on Starla and me. Starla nuzzled her furry face close to the screen, and I spoke to Julie in soothing tones to distract her while she received the injections. Julie said that it felt like Starla was in the room with her and that Animal Therapy is “like an extra healthy pain killer!”

Preparing for the Future with Career Change Dogs

Becoming a service dog takes a special combination of health, skill, and behavioral soundness. Standards of organizations like Leader Dogs for the Blind are necessarily high, and not all dogs end up making the grade. Dogs who don’t graduate are still incredibly well trained; they are lovingly called “career change” dogs. These talented dogs can serve in the most difficult, stressful areas of all—areas such as the Tallahassee Memorial Children’s Center and the courthouse.
TMH is one of a few organizations to be called when a career change dog is available. The process starts early. Animal Therapy volunteers willing to adopt at a moment’s notice join a waitlist. When Perkins gets the call, she has just ten days to: (1) pay the $1000 fee to receive the dog (these dogs have had
$35,000 or more invested in their breeding, training, and care), and (2) travel to Michigan to get the dog. Thanks to donors and volunteers, TMH Animal Therapy was recently able to accept two dogs—Dyna, a golden retriever, and Maru, a golden lab. In addition to their already extensive training, they received TMH Animal Therapy training with their volunteer owners to ready them for service in Tallahassee, helping people relax even in the midst of stressful circumstances. You can tell from the dogs’ wagging tails and the clients’ joyful smiles, that everyone enjoys doggone cuddling!

For more about TMH Animal Therapy news or Rikki SuperPup, contact the TMH Foundation at anne.munson@tmh.org or 850-431-5931.