Issue of Leg Broken by Romping Dog Must Go to Jury 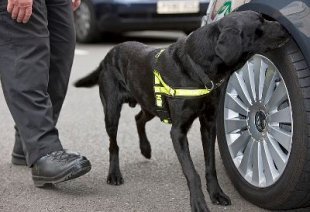 Florida’s First District Court of Appeal (“1st DCA”) recently upheld a defendant’s conviction for felon in possession of a firearm after a K9 unit alerted police to firearm and ammunition in the defendant’s car. Police stopped Joseph Jefferson after seeing him driving without a seatbelt. After making contact with Jefferson, the police quickly surmised that Jefferson had no driver’s license and arrested him for the offense. Twenty minutes later, a K9 unit arrived, sniffed the car, and alerted. Police discovered a firearm inside the vehicle.

On appeal, Jefferson argued that his conviction for possession of a firearm by a felon was invalid because the police had illegally seized his vehicle in violation of the Fourth Amendment. Jefferson contended that the police had no authority to hold the car for the twenty minutes between his arrest and the dog sniff and therefore the dog sniff should have never occurred.

The 1st DCA affirmed Jefferson’s conviction by distinguishing Jefferson’s case from the U.S. Supreme Court’s decision in Rodriguez v. United States. In Rodriguez, the Supreme Court held that absent reasonable suspicion, police may not extend the duration of a traffic stop in order to conduct a dog sniff—thereby developing reasonable suspicion for an arrest. The 1st DCA observed that Jefferson was already under arrest and, unlike the defendant in Rodriguez, Jefferson would not have been free to drive the car away before the dog sniff occurred. The 1st DCA held that, because no one was available to take control of Jefferson’s car, the police were free to initiate a dog sniff.