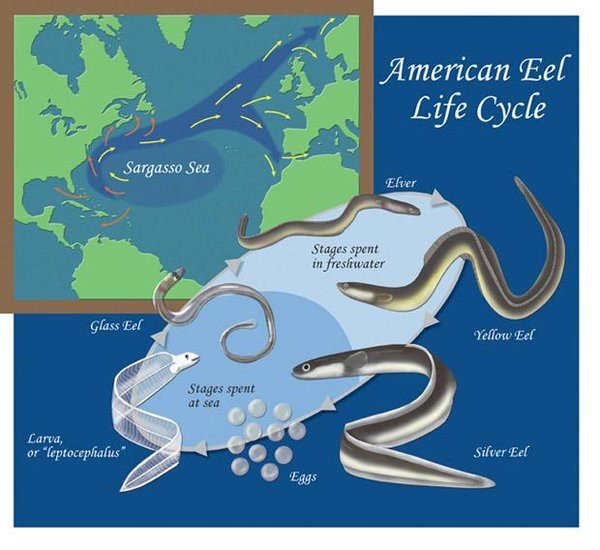 It is quiet, the only noise is the swish of the dip net as it gets pushed and pulled through the cold river water. It is a cool night in Maine. The net pulls free of the water; it writhes with a life of its own: glass eels. The man on the other end of the net smiles. He is one of America’s many eel traffickers and he’s just struck clear gold… again.

An increasing number of American citizens are violating 16 U.S.C. § 3371 through § 3378, also known as the Lacey Act, to make a quick profit in America’s growing black market eel trade. The Lacey Act, among other things, criminalizes the sale, transport, and harvest of specific plants, animals, fish, and wildlife in interstate and foreign commerce [1].

The Act was passed in 1990 in an attempt to save various U.S. bird populations which were being hunted to extinction [2]. Since its conception, the Act has been amended many times and now serves as the primary deterrent of importation and subsequent increase of invasive species [3]. However, when it comes to American eels, the fight is to keep poachers from moving the eels out of the country for sale, rather than bringing a foreign species in. It is critical to prevent the illegal harvest and transport of American eels because, they are not only an economically important resources to multiple states; they are also an important part of the watershed eco system [4]. American eels spawn in the Sargasso Sea, which is the area of the North Atlantic Ocean between the North American and Canadian coasts, extending East almost to Africa [5]. It is cradled on all sides by currents [6]. After spawning season, the eel larvae travel with the Gulf Stream from the Sargasso to the coastal waters of the eastern United States [7]. This is the point at which the larvae enter the juvenile stage and are called elvers [8]. The elvers swim upriver and grow to adulthood in fresh water [9]. Elvers are exported to seed aquaculture farms in Asia, where they are raised to adult size and sold for food [10].

There is an extremely high demand for these fish in the international market, especially in Japan where more than 100,000 tons of eel meat are consumed every year [11]. The Asian eel has been driven to extinction by this voracious appetite and was almost followed by the European eel [12]. However, the European Union, confronted with the reality of the European eels’ dwindling population, banned exports of the critically endangered eel in 2010 [13].

Because of the threat of overfishing in America, lawmakers have prohibited elver harvesting in all but three states: Maine, South Carolina, and Florida [14]. Maine and South Carolina have large enough elver populations to support a legal fishing industry, but it is heavily regulated [15]. Individuals must be licensed in order to legally hunt elvers and must report all quantities of harvested eels to state authorities [16]. Florida does not have strong elver-related regulations, requiring only a valid freshwater commercial license and a no-cost permit from the Florida Fish and Wildlife Commission [17]. The reason for Florida’s more relaxed approach is that commercial elver fishing is nearly impossible due to the small population in the state’s waters [18]. In fact, there is only one small commercial fishery which operates almost exclusively in the St. Johns River system [19].

Why do American fishermen turn to illegal fishing? American harvesters and exporters of American eels in the United States can sell elvers to east Asia for more than $2,000 per pound [20]. In the early days of the eel trade, there were no catch limits and dealers were allowed to pay cash, with no questions asked [21]. Then, the government began instituting catch limits and made dealers pay in checks, but the valuation of eels by buyers overseas only continued to climb [22]. Illegal American eel dealers were fooling the system by buying elvers from states where harvesting is illegal, and then transporting them to destinations where they could be combined with legally-harvested elvers [23]. The dealers would then doctor shipping documents and send the product to Asia [24]. In an attempt to turn the tide of illegal eel harvesting and transporting, the United States Fish and Wildlife Service launched a multi-jurisdiction undercover investigation, code named “Operation Broken Glass” [25]. The main trap was set by federal agents posing as harvesters and dealers, who sold packages of elvers to suspected illegal dealers [26]. Subsequently, the undercover agents followed the money and the eels [27].

To date, the investigation has resulted in guilty pleas for twelve individuals whose combined conduct resulted in the illegal trafficking of more than $2.94 million worth of elvers both domestically and abroad [28]. The illegal harvest and sale of American eels is a felony under the Lacey Act; each violation carries a penalty of up to five years in prison, a fine of up to $250,000 (or up to twice the gross pecuniary gain or loss) or both [29].

The most recent cases initiated by Operation Broken Glass were in April of 2017. Tommy Water Zhou, a New York seafood dealer, obtained a Maine elver dealer license and used it to cover his illegal activity of trafficking in baby glass eels in violation of the Lacey Act [30]. Zhou pled guilty in federal court to illegally buying or selling more than $150,000 worth of elvers [31]. In a following case, Richard Austin pled guilty in federal court to trafficking juvenile American eels [32]. Austin admitted to illegally transporting or selling elvers, which had been harvested illegally in Virginia and Massachusetts, in interstate commerce [33]. Austin was a fisherman from Maine, but he travelled to locations near Yorktown, Williamsburg, and Newport News, Virginia, and Massachusetts, to harvest elvers. Austin would then sell to dealers from Illinois and New York, who then exported the elvers to Asia [34]. From 2013 to 2015, Austin trafficked approximately $189,374 worth of illegally-harvested elvers [35].

The Lacey Act protects many irreplaceable resources. While the average person may think of it as merely a law that prevents exotic species from being exploited through international trafficking. Such as thwarting baby pandas from being served in a deli or discouraging the poaching of rhinoceroses for their horns, it is so much more. Dan Ashe, the Director of the United States Fish and Wildlife Service captured that importance when discussing the crackdown on illegal elvers harvesting, “This case underscores the role U.S. citizens often play in wildlife trafficking and demonstrates that this deadly trade does not solely impact large, charismatic mammals in distant countries” [36].