From an Unconventional Pet to an Invasive Species: Burmese Pythons Move to Florida

Animals of The Florida Bar!!! 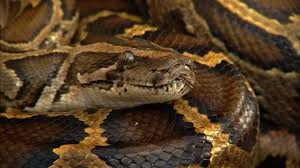 The Everglades National Park, located in South Florida, has been deemed the largest subtropical wilderness in the United States by the National Park Service [1]. While there are many predators within the Everglades, there is one invasive species that has caused the state of Florida to take legislative action to combat its damaging effects—the Burmese python.

The origin of the Burmese python within the state of Florida is not certain; the species originates from India, lower China, the Malay Peninsula, and some islands of the East Indies [2]. Reports and sightings have been recorded since the late 1980’s which lead to the speculation that this species may have escaped from a breeding facility after Hurricane Andrew [3], or perhaps simply released into the wild by pet owners. Today, there is an estimated 100,000 Burmese pythons within the Florida Everglades to date, and because females can lay up to 100 eggs at a time, these pythons continue to thrive in this new environment [4].

But, why does this matter? A significant decline in native mammal populations has been shown. These pythons are known to eat imperiled species such as wood storks, Key Largo woodrats, and limpkins, as well as large animals such as alligators, white tailed deer and bobcats [5]. In addition to this, these pythons are also competing with native predators for food, habitat and space [6]. There are only two predators within Florida to match this species: humans and alligators. These snakes, which can grow up to 20 feet, have begun to change the ecological balance of the Everglades for the worst [7].

The State of Florida has made it illegal to “possess, import into the state, sell, barter, trade, or breed” Burmese pythons as of 2010 [8]. Before that, the Florida Fish and Wildlife Conservation Commission (FFWCC) had developed a few solutions to combat the python problem. In 2008, the FFWCC implemented Rule 68-5.004: Amnesty for Persons Relinquishing Non-native Pets. The purpose, as outlined within the rule, was to encourage the surrender of non-native animals rather than releasing them into Florida’s environment [9]. The rule also states the FFWCC will sponsor amnesty events in furtherance of the rule’s purpose [10]. As of 2015, there have been 2,530 surrenders of several types of exotic animals, including Burmese pythons [11].

The FFWCC has also coordinated and sponsored “python hunts” named the “Python Pickup Program” [12]. Prizes are won through a monthly drawing and include snake hooks, engraved Yeti tumblers, GoPro cameras, Badlands backpacks and the grand prize is a Lifetime Sportsman’s License [13]. Even if hunters are not drawn to the various prizes, FFWCC offers a no-cost Python Removal Permit to qualified people for removing Burmese pythons (and other conditional reptiles) from three areas including the Everglades [14].

Most recently, the FFWCC and the South Florida Water Management have teamed up to renew the “Python Elimination Program” [15]. The hunters, 25 participants who met certain requirements, were paid $8.10 an hour plus $50 for every 4-foot snake with an additional $25 per additional foot of snake; total compensation was not to exceed $6,000 [16]. The pilot phase extended from March 25th to June 1st 2017, with 158 total pythons eliminated and a total program cost of $49,504, leaving $125,496 of the budget remaining for future endeavors [17].

As previously stated, in 2010, the State of Florida passed a statute making it illegal to possess Burmese Pythons. The creation of the statute was due to the FFWCC’s elimination of its “Reptiles of Concern” category, now listing those reptiles as “Conditional Species” [18]. The legislation was done to essentially phase out ownership of these pythons and the FFWCC does not provide a clear definition for “Reptiles of Concern.” However, it does explain that a “Conditional Species” is not allowed to be acquired for personal possession. People who owned a “Reptile of Concern” before July 1, 2010, were permitted to keep their animal for the remainder of its life, but the FFWCC requires that the owners maintain a valid Reptile of Concern license for these animals [19]. Anyone who possessed a former reptile of concern that could no longer keep it was encouraged to relinquish it on a Nonnative Pet Amnesty Day, hosted by the FFWCC, or to a licensed reptile dealer [20].

The many state programs and regulations set out by the FFWCC have provided some effective solutions to the many contributors of the problem. Amnesty programs quell the fear of consequences for owners who cannot handle their exotic pet any longer, but also provide a solution for them that does not involve releasing the animal into the wild. The stricter enforcement on certain reptiles has also, in turn, provided less opportunity for these animals to be possessed by people who are not qualified and trained to handle and care for them.

Under the Lacey Act, it is unlawful for any person:

In 2012, the U.S. Fish and Wildlife Service amended its regulations to the Lacey Act to include the Boa Constrictor, four python species (including the Burmese python), and an anaconda species within the listings of “Injurious Reptiles” [22]. This rule requires a specific permit for scientific, medical, educational or zoological purposes, or a permit by federal agencies solely for their own use, in order to import live snakes, gametes, or hybrids of the nine species or their viable eggs [23]. The purpose for this amendment is as follows,

The best available information indicates that this action is necessary to protect the interests of human beings, agriculture, wildlife, and wildlife resources form the purposeful or accidental introduction and subsequent establishment of these large nonnative constrictor snake populations into ecosystems of the United States [24].

This federal action strengthened the rules created by the Florida Fish and Wildlife Commission, both limiting interstate commerce and also enforcing Florida’s laws.

While many Floridians commend the actions of the Florida Fish and Wildlife Conservation Commission for its innovative actions to combat the populating pythons, there are some who disagree with the methods of elimination. People for the Ethical Treatment of Animals (PETA) has expressed its disdain with decapitation as a form of elimination of the pythons [25]. PETA sent the FFWCC a letter urging officials to limit the killing methods to captive-bolt guns or firearms, stating that if used properly, these weapons would instantly kill the animals [26]. PETA finds decapitation inhumane because it alleges that after decapitation, pythons can remain alive and “writhe in agony for hours” [27].

For others, the issue with the python hunts is centered more around the impracticality of complete eradication. As stated by one reporter, “No one believes Burmese pythons in Florida can be eradicated” [28]. Not only do many people believe that the problem will never be solved, there are some who do not find there to be a large enough problem to warrant a response of this magnitude. In response to a study reporting severe declines in the population of small and mid-sized animals, Florida herpetologist Shaw Heflin stated “The study should have never made it to the light of day . . . I don’t see anything thus far to point to the fact that these pythons are causing serious harm” [29].

Regardless of one’s views on the responses formed by the state government agencies towards this issue, the implementation of federal regulation on this issue acknowledges that there is a problem with this invasive species. Even PETA does not contest the issue presented to the State of Florida, simply the means by which FFWCC is allowing elimination to occur. As time progresses and more studies develop on the ecosystem’s impact, perhaps more regulation will be promulgated concerning the issue and the dialogue will increase between all interested parties.

27. Id. The FFWCC has acknowledged that decapitation is not “the recommended method of euthanasia”; it encourages a blow to the head before decapitation to be more humane. Python Euthanasia, Florida Fish and Wildlife Conservation Commission, http://myfwc.com/wildlifehabitats/nonnatives/