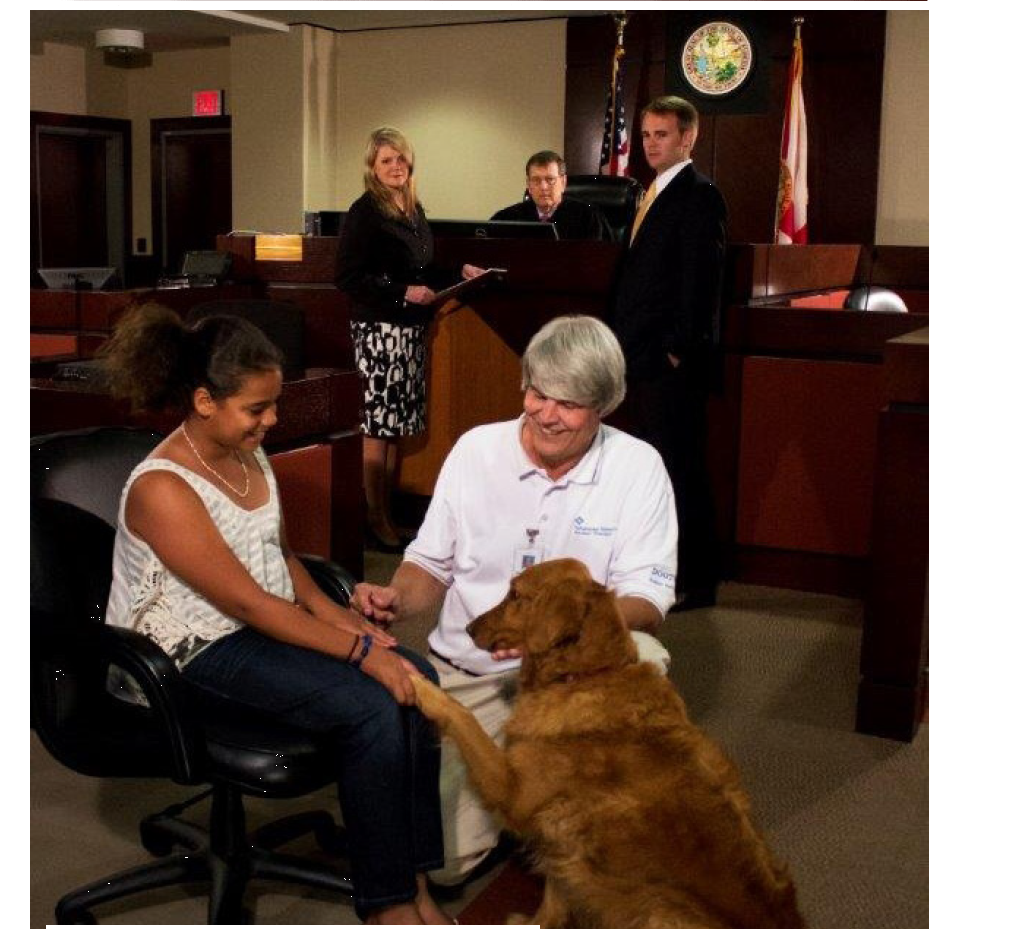 When she first arrived in Florida shortly after Hurricane Katrina in 2005 as a young Golden Retriever, no one could have predicted that this special dog named Rikki would help change the law in Florida so that therapy animals are authorized to appear in certain court proceedings. After a dedicated ten years of work in the community, Rikki is now retiring to relax at home and enjoy her favorite treat: baby carrots.

When her Tallahassee-based foster parents, Chuck and Patty Mitchell, noticed that Rikki loved visiting patients at a local rehabilitation center they decided that she also might be able to help people in other stressful settings. When Rikki attended the deposition of a young girl who was answering questions about an accused child molester, Rikki’s presence helped the girl to relax and tell her story with critical details that otherwise might have been lost. When it was time for the girl to testify in court, unfortunately Rikki wasn’t allowed in the courtroom. From that time on, Rikki joined a team of advocates interested in animal therapy who were working to change the law in Florida.

Advocates in other states had started to use therapy animals to assist victims and witnesses years earlier, before any statewide legislation was developed. In 1989, a retired service dog, a German Shepherd named Sheba, assisted child sexual-abuse victims in the Special Victims Bureau of the Queens, NY, District Attorney’s Office. The following year, in 1990, another German Shepherd named Vachss made a courtroom appearance at the feet of a 5-year-old girl during a preliminary hearing in a state court in Mississippi. Building on this work, in 2006 the Second Judicial Circuit in Florida partnered with the State Attorney’s Office, the Guardian Ad Litem, and the Tallahassee Memorial Animal Therapy Program to plan an animal therapy in the courts program. The following year, Mickey, a Golden Retriever, and his handler assisted two child victims with trial preparation and then waited for them to testify during the trial.

In late 2009, with the help of Wakulla County Judge Jill Walker, animal therapy visits were welcomed in dependency court. The concept spread to Leon County the next year and continued to grow. Shortly thereafter, in 2011, the work of Rikki and other therapy animals and their team of advocates achieved success in amending section 92.55, Florida Statutes, which authorizes courts to adopt “just and appropriate” conditions when taking the testimony of a child victim or witness in a proceeding involving a sexual offense. The 2011 amendments to that statute, which passed unanimously in the Florida legislature, specifically include, as “just and appropriate” conditions, the use of a “therapy animal that has been evaluated and registered according to national standards.” § 92.55(4), Fla. Stat.

The importance of this law to the administration of justice cannot be overstated, as the presence of therapy animals can help facilitate candid testimony of victims or witnesses. Indeed, some judicial circuits have expanded the use of therapy animals to assist victim witnesses in proceedings other than those that involve a sexual offense, recognizing that proceedings in dependency court or other court proceedings can be similarly traumatic for a victim or witness. And the use of therapy animals is not limited to children. For example, the Ninth Circuit’s K-9th Circuit Program allows therapy animals to be used with adult victims of violent offenses, those who are mentally or emotionally challenged, or for any situation in which the court determines that a therapeutic approach will serve the ends of justice by allowing witnesses to testify with more clarity and in greater detail, so that the court has a clearer record on which to rule. Relying on section 43.26, Florida Statutes, which authorizes the chief judges of each judicial circuit to do everything necessary to promote the prompt and efficient administration of justice, Chief Judge Lauten of the Ninth Circuit entered an Administrative Order establishing the K-9th Circuit Program (which had been founded by Judge Turner). That program utilizes not only therapy dog teams but also a professionally trained service dog, Tonx, and his handler – both of whom regularly work with children at the Juvenile Justice Center.

Florida’s Statewide Guardian ad Litem Program currently is advocating for further amendments to section 92.55 so that the use of therapy dogs is not only authorized for children in cases involving sexual offenses but also can reach other courtroom settings. The Program encourages courts statewide to adopt programs that allow therapy dogs to assist children in abuse, abandonment and neglect proceedings, and also to assist adults with intellectual disabilities.

The work started by Rikki and others has been expanded to benefit hundreds of victims and witnesses in different proceedings throughout Florida – all of which was impossible to predict when that special puppy came to Florida in 2005.

General information about the use of dogs in courtrooms across the country: