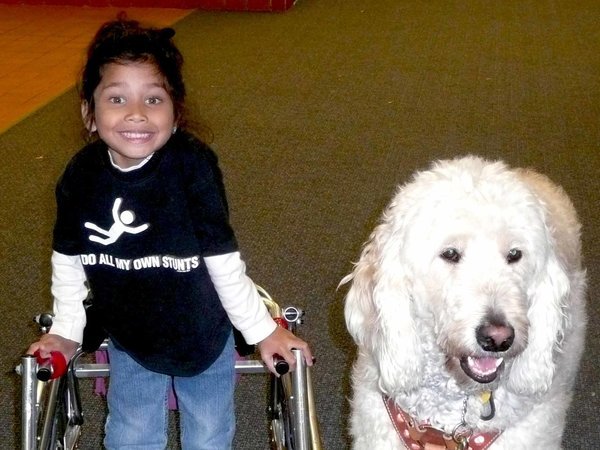 On Halloween this year, the U.S. Supreme Court had the treat of oral argument in an animal law case, Fry v. Napoleon Community Schools. Ehlena Fry is a young woman with cerebral palsy who, upon recommendation of her pediatrician, got a service animal, a goldendoodle named Wonder, to help her become more independent. But when Ehlena went to school, she was told that Wonder was not allowed. The school’s legal position was that it was already paying for an aide for Ehlena under the Individuals with Disabilities Education Act and that therefore Wonder was unnecessary. Ehlena’s position was that much like a blind student might have a service animal to assist in navigating the school instead of relying on a teacher to assist, Ehlena would use Wonder in gaining independence. Wonder was specifically trained to use handicap buttons, open and close doors, and stabilize Ehlena as she transferred from a wheelchair to a walker or to a toilet. During the trial phase, Ehlena asserted the school required that she demonstrate Wonder assist her in using the restroom. Ultimately, Ehlena was home-schooled before transferring to another school where Wonder was welcomed. Ehlena sued the original school under the Americans with Disabilities Act (ADA), among others, seeking emotional damages, though Ehlena’s parents assert the real victory would be establishing precedent allowing for service animals in schools. The ACLU, representing Ehlena, is asking that the court hold that under the ADA, Ehlena and others in a similar situation could go directly to federal court, rather than go through administrative procedures other laws require, and as the school board and National School Boards Association argue. Ehlena has not yet won in court but is hoping for victory in the U.S.’s highest court.