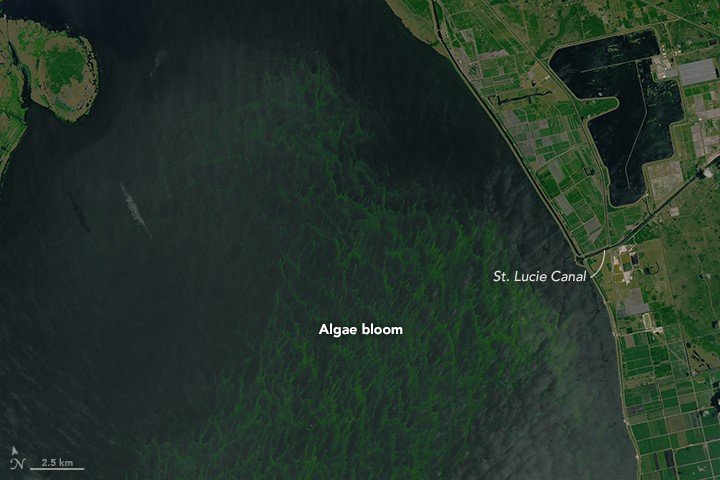 Governor Rick Scott recently declared a state of emergency in Martin, St. Lucie, Lee, and Palm Beach Counties due to toxic blooms of blue-green algae—also known as cyanobacteria—that have spread from Lake Okeechobee into local canals, rivers, estuaries, and beaches. By early May of this year, the toxin-producing algae covered 33 square miles of the lake. In order to prevent flooding, the U.S. Army Corps of Engineers Jacksonville District discharged a high volume of the lake’s polluted water into local canals, easing the strain on the lake’s aging dike. The blooms result in a thick sludge that is harmful to both humans and wildlife. Fragile ecosystems off Florida’s coasts, including seagrasses, oyster beds, and fish populations, are all at risk. Environmental groups warn that the toxic sludge could also threaten Florida’s already endangered manatee populations. In humans, ingesting the algae-tainted water can cause nausea, vomiting, and in extreme cases, liver failure. The blooms are caused by pollution—sewage, manure, and fertilization runoff from surrounding farms into the lake—coupled with warm water temperatures.